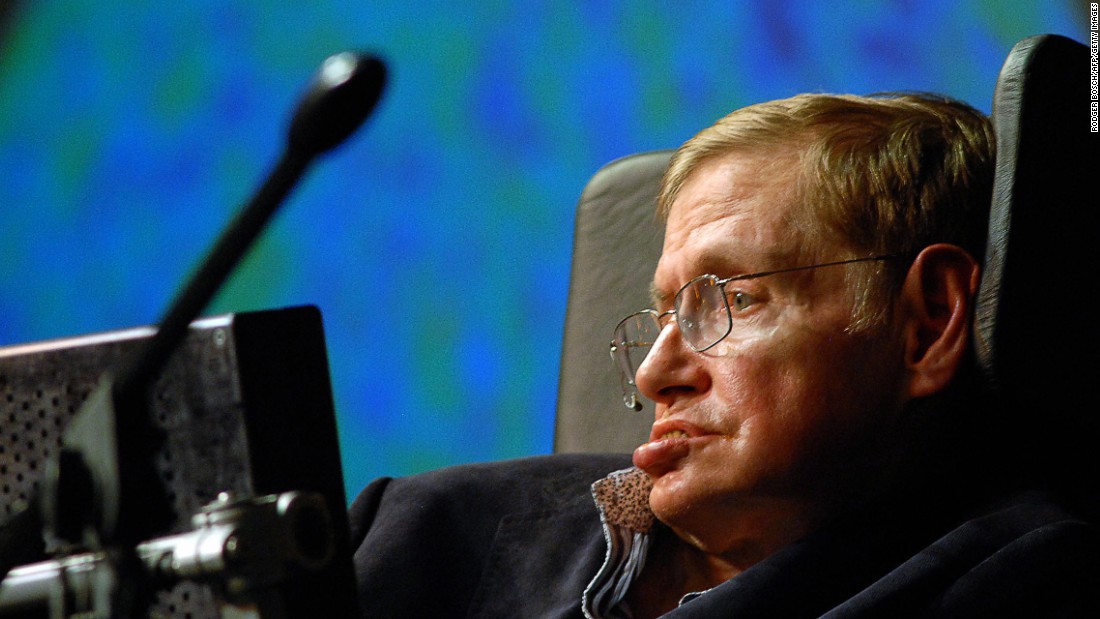 (CNN)Here’s a look at the life of renowned theoretical physicist, cosmologist, astronomer and mathematician, Stephen Hawking.

Hawking was born on the 300th anniversary of astronomer and physicist Galileo Galilei’s death (January 8, 1642).
He was the 17th Lucasian Professor of Mathematics, an academic chair at Cambridge University. From 1669 to 1702, the position was held by Sir Isaac Newton.
Guest-starred, as himself, on “The Big Bang Theory,” “Star Trek: The Next Generation” and “The Simpsons.”
Visited all seven continents, including Antarctica.
Lou Gehrig’s Disease (Amyotrophic Lateral Sclerosis or ALS), is usually fatal after three years. Hawking survived it for 55 years.
The disease left him paralyzed and completely dependent on others and/or technology for everything: bathing, dressing, eating, mobility and speech. He was able to move only a few fingers on one hand.
His speech synthesizer had an American accent.

1963 – Is diagnosed with the motor neuron disease ALS.
1966 – Completes doctoral work in theoretical physics, submitting a thesis on black holes.
1970 – Combines the theory of relativity with quantum theory and finds that black holes emit radiation.
1974 – Elected as a Fellow to the Royal Society, the oldest continuous scientific academy in the world.
1979 – Becomes the 17th Lucasian Professor of Mathematics at Cambridge University.
1982 – Receives a CBE, or Commander of the Order of the British Empire.
1985 – Hospitalized with pneumonia, Hawking requires an emergency tracheotomy, causing permanent damage to his larynx and vocal cords. A keyboard operated electronic speech synthesizer is refined and adapted to his wheelchair by David Mason, an engineer married to Elaine Mason, one of Hawking’s nurses (and future wife).
1988 – His book, “A Brief History of Time: From the Big Bang to Black Holes,” is published. It becomes an international best-seller.
2004 – Reverses the 1966 theory that black holes swallow everything in their path forever and declares that black holes will never support space travel to other universes.
April 26, 2007 – Becomes the first quadriplegic to experience zero gravity, aboard a Zero Gravity Corporation flight.
October 2007 – “George’s Secret Key to the Universe,” the first in a series of children’s books to help explain the universe, written with his daughter Lucy, is published.
November 30, 2008 – Is appointed by the Perimeter Institute for Theoretical Physics in Waterloo, Ontario, to be its first Distinguished Research Chair.
July 30, 2009 – Is awarded the Presidential Medal of Freedom by US President Barack Obama.
September 30, 2009 – Steps down as the Lucasian Professor of Mathematics at Cambridge University after 30 years. Hawking will continue to work at the university.
2009-2018 – Director of Research at the Institute for Theoretical Cosmology at the Department of Applied Mathematics and Theoretical Physics at Cambridge University.
September 7, 2010 – “The Grand Design,” written with Leonard Mlodinow, is published.
December 2012 – Wins the Fundamental Physics Prize and is awarded $3 million for his theory on black holes emitting energy.
September 10, 2013 – “My Brief History” is published. The biography looks at his life and the development of his intellect.
November 2014 – “The Theory of Everything,” a movie based on Hawking’s life starring Eddie Redmayne, opens in US theaters. Redmayne later wins the best actor Oscar for his portrayal of Hawking.
March 2016 – “George and the Blue Moon,” the fifth installment in his series of children’s books co-written with his daughter Lucy, is published.
March 14, 2018 – Passes away at the age of 76.